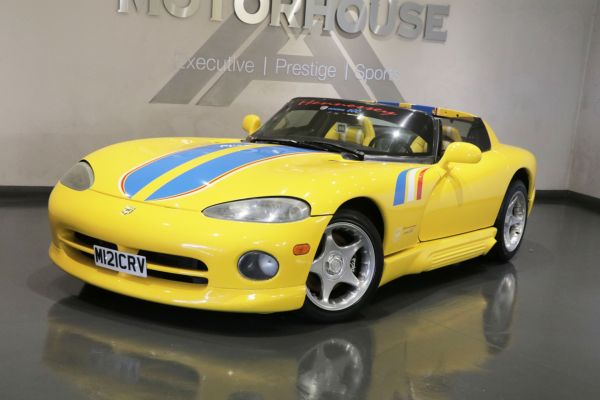 That a major US manufacturer could come up with such an exciting concept car was startling enough but Chrysler's decision to put the Viper into production was nothing short of astonishing. Inspired, as its name suggests, by the legendary Cobra, Tom Gale's design study made its motor show debut in 1989 following discussions between Chrysler boss Bob Lutz and Cobra-creator Carroll Shelby; its appearance triggering an avalanche of deposit cheques. Without doubt, a large part of the Viper's 'back to basics' appeal stems from its unique selling point: a massively powerful eight-litre, V10 engine. The latter had been born out of the requirement for a larger unit to power the Dodge Ram pick-up truck, the prototype being created simply by grafting two extra cylinders on to the Ram's existing 5.9 litre, V8. Despite being relatively 'low-tech', the Lamborghini-developed pushrod V10 churns out 400bhp and a brutal 450lbs/ft of torque at just 3,600rpm, figures which the 3,280lb Viper translates, via a six-speed manual gearbox, into a 0-60mph time of 4.7 seconds and a top speed of 165mph. Compared with this paragon of power units, the Viper's running gear makes somewhat less interesting reading: a multi-tubular spaceframe chassis endowed with all-round independent suspension and four-wheel disc brakes residing beneath the svelte glassfibre bodywork.

This example of the ultimate in open-top motoring incorporates the 'Venom' package of enhancements developed in the USA by Chrysler tuning specialists, Hennessey Performance and is reported to have 600 plus horsepower on tap. Other noteworthy features include Koni suspension, slot-in windows and clip-on hardtop. Imported to the UK in 2007, the Viper was placed into dry storage in 2009 coming out when it was sold in 2013. The new owner carried out refurbishment of the road wheels, replacement of the power steering rack and pump and various other works. Purchased by a private collector in 2017 who has had the mechanics all gone through and the yellow leather interior re-dressed. This most exciting Hennessey Viper Venom roadster, with carbon-style dashboard is a rare opportunity to purchase a real 1990's supercar.